Solar hot water cylinders (often called ‘twin coil’ or ‘dual fuel’ cylinder) store the heat that is produced by solar heating panels. Your solar system heats the water that you use in your house. However, some cylinders may start to leak after a number of years. Unfortunately, this may mean that the replacement of the solar hot water cylinder is necessary.

The three main problems that may occur with solar cylinders

The coil inside the Gledhill cylinder, probe pockets or the cylinder itself may leak 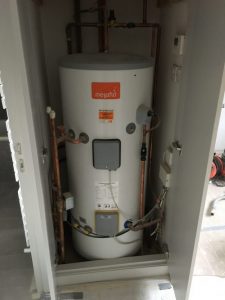 Cylinder failures we see most often

In our experience the cylinders most susceptible to leaking and coil perforation are made by GLEDHILL (these are often covered in a blue or green PVC cover).

Gledhill cylinder failures we have encountered

Below are two videos of cylinders we have worked on. After diagnosing the failure, we cut open the cylinders for further inspection and recorded the videos below for demonstration purposes.

We had diagnosed the cylinder in the solar thermal system as faulty and decided to give it a closer inspection.

The diagnose on this cylinder came as a bit of a surprise. We cut open open the cylinder and found it to be in good condition.

However, we pressurised the lower coil with water and found that it had failed on the upper join to the coil, just as we had expected.

There have been occasional cases where Newark or MCDONALD cylinders have also failed.

In some cases it is possible to replace the cylinder with a stainless steel version that is significantly more corrosion resistant.

We can organise both the cylinder replacement as well as the recommissioning of your solar system.

We often deal with cases where the cylinder and plumbing in a customer’s property is insured by British Gas or other providers. In these cases, we work with the assigned heating engineer to make the process as seamless as possible.

How to reduce the chances of cylinder failure

Some components fail due to poor quality manufacture and age. However the coil in solar cylinder is far more likely to fail if the solar antifreeze is in poor condition.

Solar antifreeze when new is slightly alkaline with a pH of about 9. If the system overheats over time, the pH will drop, eventually becoming acidic (below pH7). The resulting liquid is far more corrosive and more likely to attack the coil in the cylinder.

Avoiding overheating and regular servicing are the best ways to reduce the chance of cylinder failure.