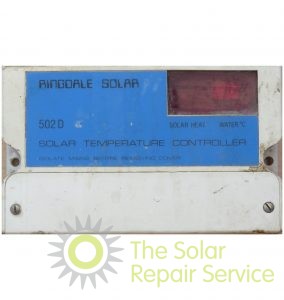 The Ringdale 501D is another version of the controller also branded by Riomay and Raydan. It is simple and effective though not very user friendly. We have limited instructions available.

The 500 series just had the two thermistors as a potential divider, and a TL062 op-amp comparing the midpoint of that with another divider made of two resistors. There was a trimpot for setting the switching differential. The op-amp then used a transistor, probably a BC337, to switch a relay. There was an RC network across the relay output to prevent arcing which played havoc with the sensing because the installers used to run the two sensor cables along the pump cable.

The 802 was a good product but all stopped working in 2012 due to the way the calendar was implemented. They would carry on working but would run the wrong day’s program To fix it you had to set a date which was 29 years previous.